ON APRIL 21 , 2022 , EMPLOYEES OF THE RIDDER AVIATION DEPARTMENT INSTALLED 2 INFORMATION BANNERS DEDICATED TO THE PROTECTION OF FORESTS FROM FIRES 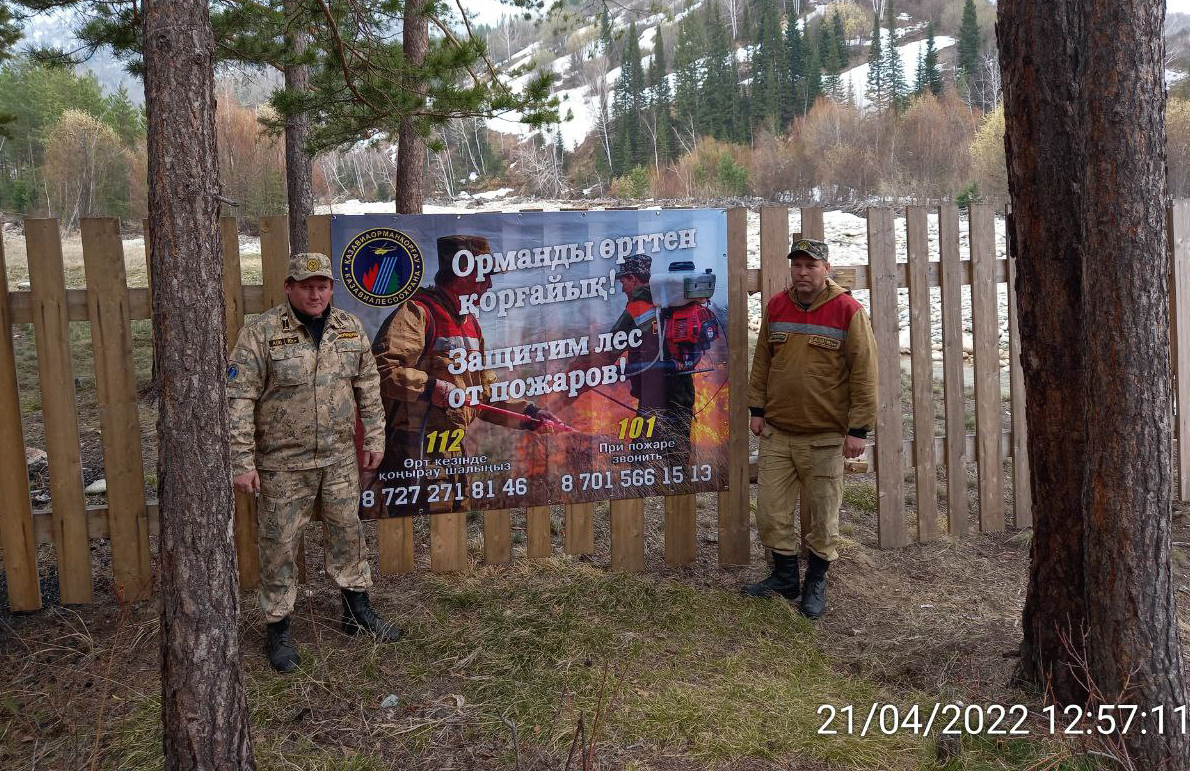 On April 21, 2022, in order to carry out fire prevention, employees of the Ridder aviation department installed 2 banners dedicated to the protection of forests from fires in the areas of mass congestion in the Ridder LH KSU and the Fir LH KSU.

ON APRIL 21, 2022, EMPLOYEES OF THE ZHAMBYL AVIATION DEPARTMENT INSTALLED AN INFORMATION BANNER DEDICATED TO THE PROTECTION OF FORESTS FROM FIRES 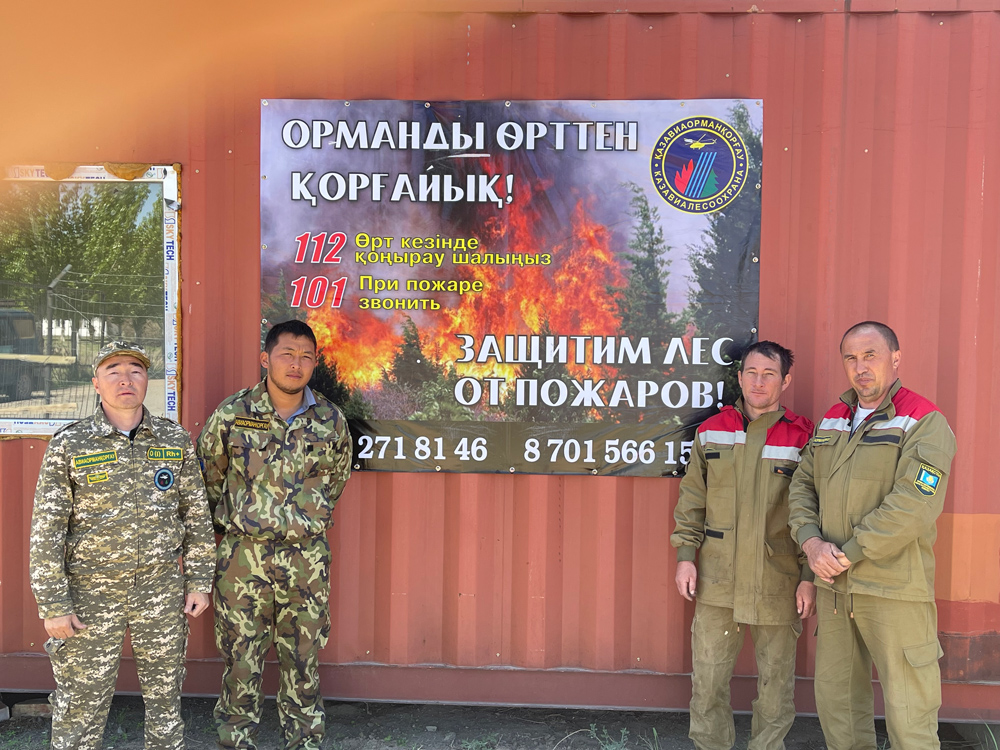 On April 21, 2022, in order to carry out fire prevention, employees of the Zhambyl aviation department installed a banner dedicated to the protection of forests from fires at the entrance to the airfield.

ON APRIL 21, 2022, A PREVENTIVE LECTURE WAS HELD BY AN EMPLOYEE OF THE KARKARALY AVIATION DEPARTMENT 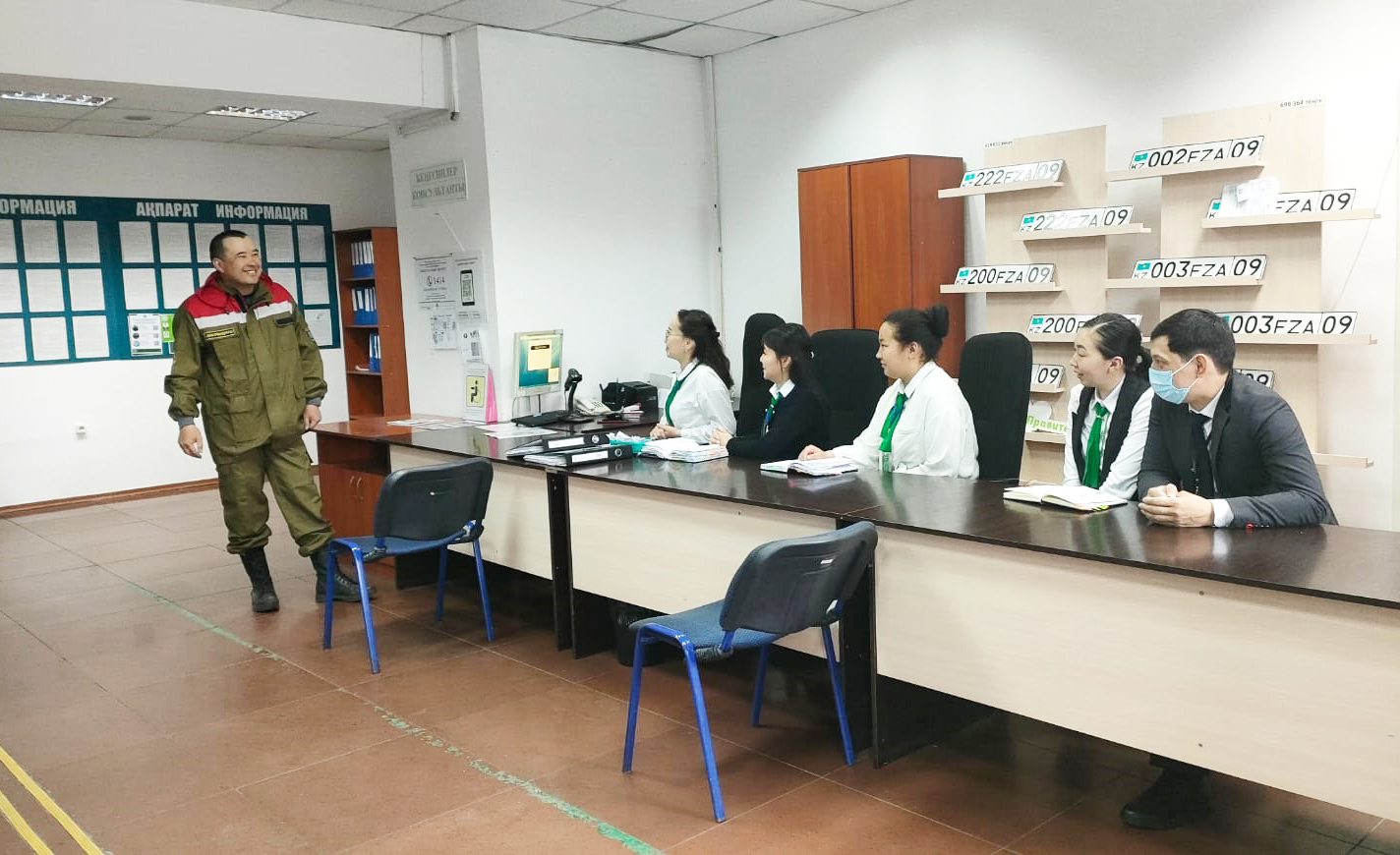 On April 21, 2022, A. A. Zhanturin, a paratrooper-firefighter of the Karkaraly aviation department, held a preventive lecture on the topic in the department for public services of the Karkaraly district of the NAO GC "Government for Citizens" in the Karaganda region: "Compliance with fire safety rules in the forests of the Karkaralinsky GNPP". Employees of the organization were familiarized with precautions when handling fire on the territory of the KGNPP, actions when detecting a forest fire, the rules of compliance with sanitary standards when visiting the forest in the Karkarala State National Natural Park.

ON APRIL 20, 2022, A PREVENTIVE LECTURE WAS HELD BY AN EMPLOYEE OF THE UST-KAMENOGORSK AVIATION DEPARTMENT 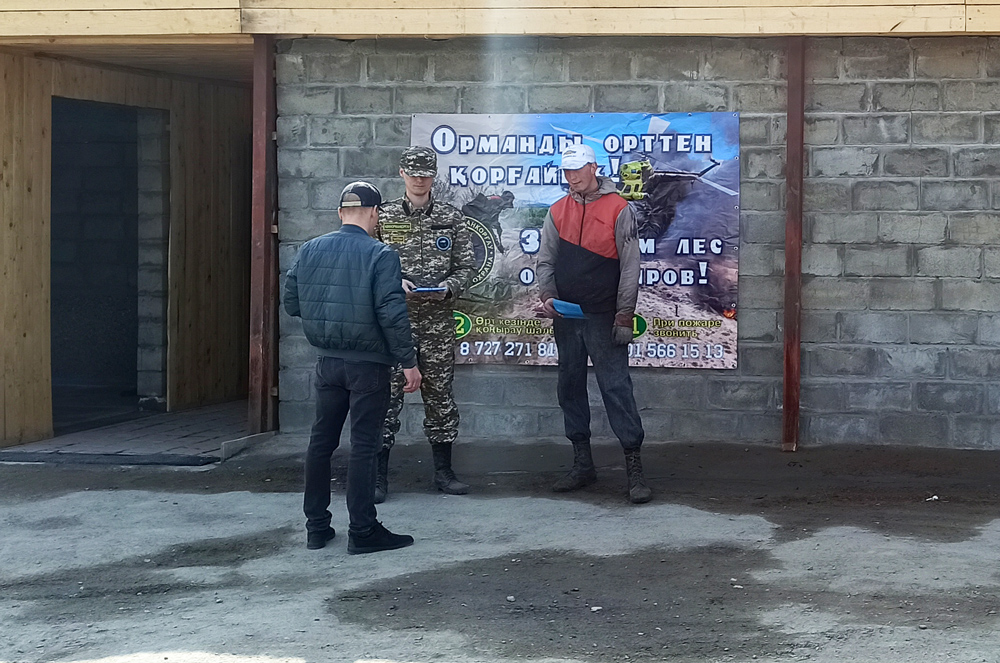 On April 20, 2022, as part of the program to inform the population, R.V. Reshetnikov, a paratrooper-firefighter of the Ust-Kamenogorsk aviation department, held a conversation on the topic on the territory of the KEREMET store adjacent to the Komsomolsk forestry: "Safety precautions for extinguishing forest fires". During the conversation, leaflets on fire prevention propaganda were distributed to the audience. On the same day, in order to carry out fire prevention, a banner was installed on the store building.

ORDER ON APPOINTMENT OF T.T. ALIYEV TO THE POSITION OF DEPUTY DIRECTOR GENERAL OF THE KAZAVIALESOOHRANA 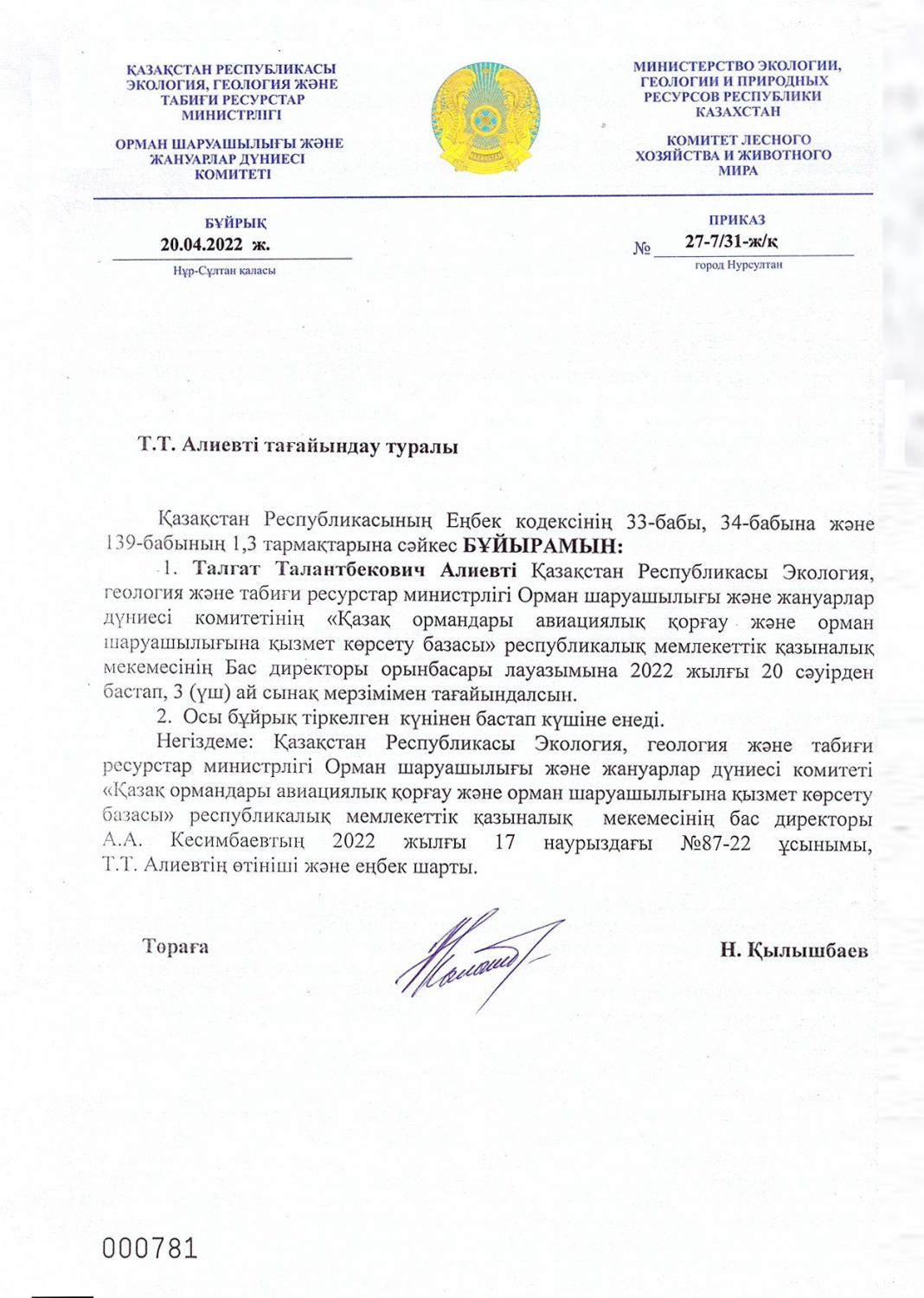 ON APRIL 19 , 2022 , 25 SEA BUCKTHORN SEEDLINGS WERE PLANTED BY THE PERSONNEL OF THE KARKARALY AVIATION DEPARTMENT 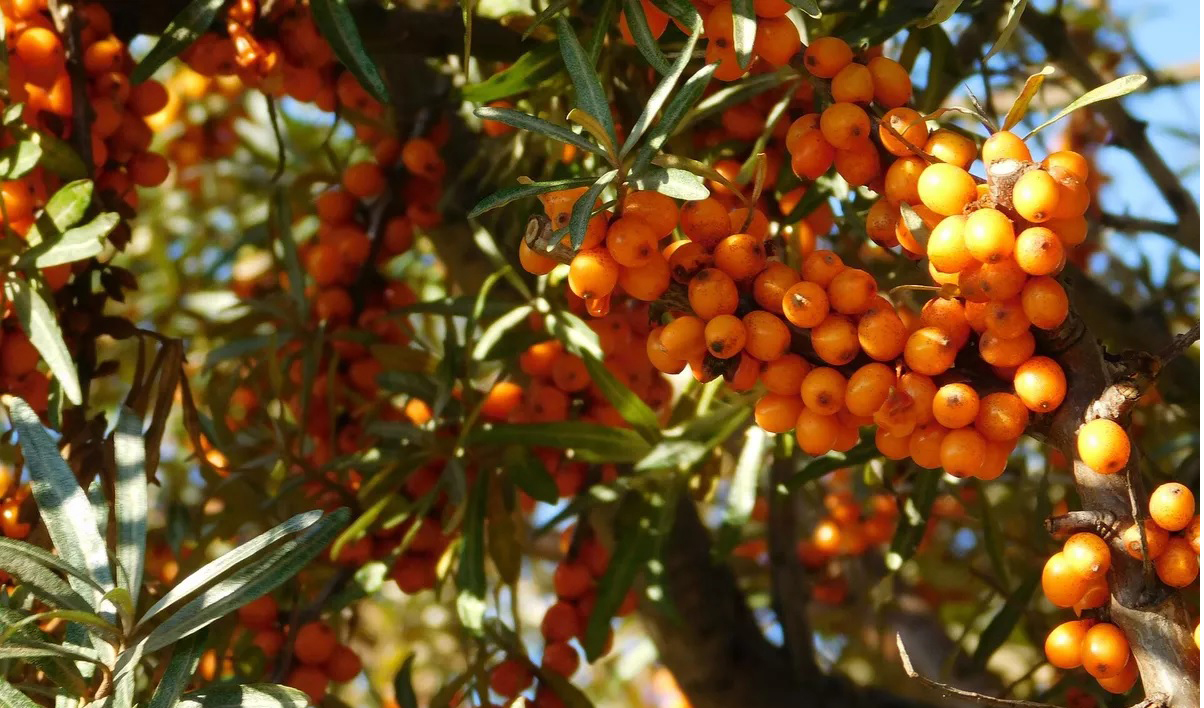 Sea buckthorn is a genus of plants in the Lochaceae family. These are shrubs or trees, usually prickly, from 0.1 to 3 m high (less often up to 6-15 m). The leaves of sea buckthorn are narrow, long, green with fine speckles on top and silvery or grayish-white (rarely golden) on the bottom. The same-sex small, nondescript flowers appear before the leaves. The fruit of sea buckthorn is a berry of bright orange color, spherical or more often elongated. The berries are densely located on the branch, clinging to it (hence the Russian name of this plant).

Sea buckthorn is mentioned in ancient manuscripts of healers of Mongolia and Tibet, where it is described as a universal medicine. However, the plant is known not only in Ancient Asia. Its pollen was found in excavations of settlements in Scandinavia. In ancient Greece, sea buckthorn shoots were fed to sick and injured horses, speeding up their recovery. In the Middle Ages, the medicinal properties of sea buckthorn were forgotten and until the XIX century it was destroyed everywhere as a useless shrub. In the last few hundred years, interest in sea buckthorn has recovered and as a result, the plant has begun to be cultivated. Sea buckthorn contains a whole "bouquet" of vitamins, trace elements and organic acids, which are widely used for the treatment and prevention of many diseases. Sea buckthorn oil, a product obtained from red fruits, is considered a unique multivitamin preparation. It promotes rapid wound healing, relieves pain and has a bactericidal property. It can be used both externally and internally.
Sea buckthorn juice is used to treat cough. To do this, it is mixed with honey, and then consumed. Inhalations with sea buckthorn oil are a recognized means of preventing the respiratory tract. 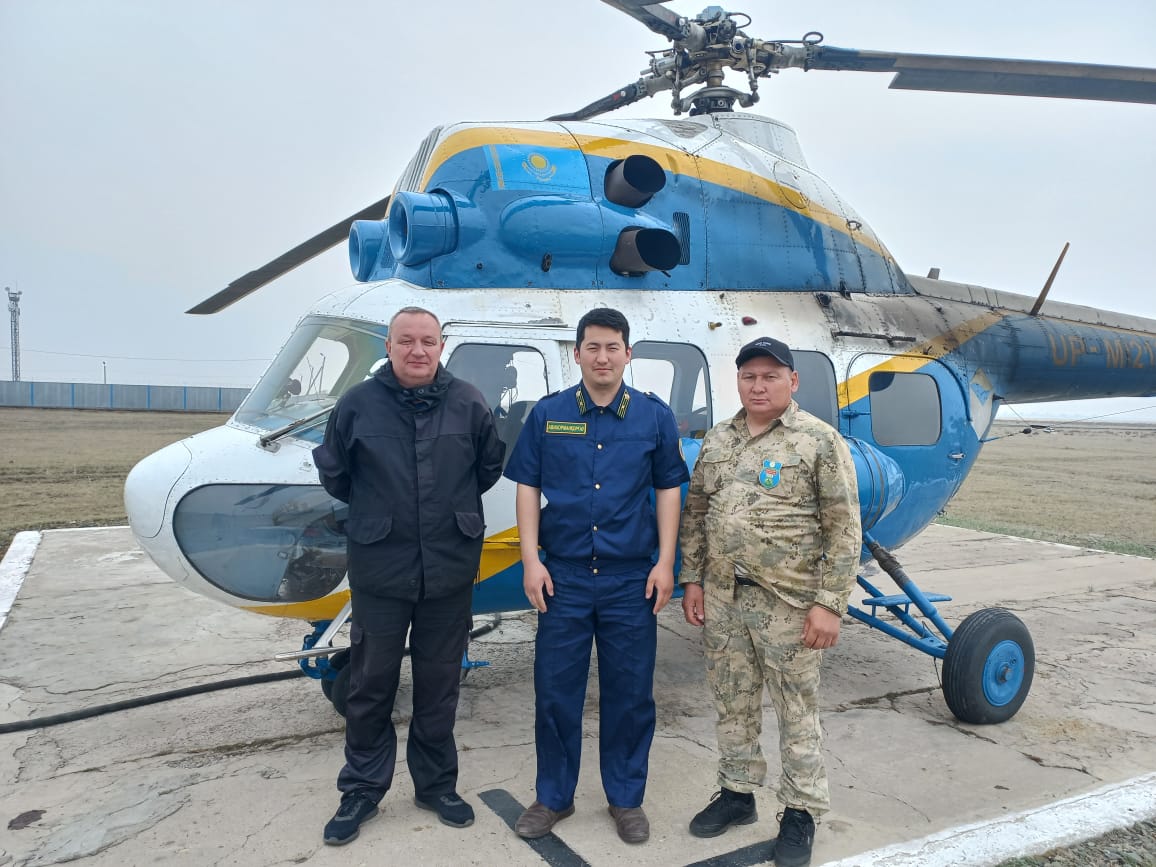 On April 19, 2022, specialists of the Pavlodar aviation department, together with representatives of the operational group of the Service for the Protection of Natural Complexes and objects, flew over the protected area in order to monitor compliance with the rules of nature management and identify violations of environmental legislation. No violations of environmental legislation were detected during the air patrol.

THE BEGINNING OF FOREST AVIATION WORKS BY BAYANAUL AVIATION DEPARTMENT

On April 19, 2022, the specialists of the Barnaul aviation department, together with representatives of the Bayanaul GNPP, flew over the protected area. During the air patrol, radio communication with forestry departments, observation towers, and numbering of cordons were checked. An inspection of the condition of fire-fighting roads and mineralized strips serving as barriers from the spread of possible grass-roots fires and reference lines for the localization of active foci was carried out.

DURING THE FIRE SEASON OF 2022, AN EC-145 HELICOPTER IS INVOLVED IN THE BARNAUL AVIATION DEPARTMENT TO PERFORM FOREST AVIATION WORK

The Eurocopter EC 145 is a multi-purpose helicopter created by the Franco-German concern Eurocopter. The helicopter was created on the basis of the Eurocopter/Kawasaki VK 117 C-1 model and originally bore the designation VK 117C-2. The new helicopter has a more spacious cabin and a larger take-off weight. The forward part of the fuselage was designed anew (taking into account developments in EU 135), which allowed to reduce aerodynamic drag and improve visibility for the crew. The distinctive features of the helicopter are a rotor with an optimized profile and an updated avionics. The EU 145, unlike the EU 135, has retained the classic single-screw scheme. Despite the initial plans to equip the EU 145 with a fenestrone tail rotor, the designers of the Eurocopter, after a series of experiments and analysis of the experience of developing and operating the AS 365, abandoned this idea, considering the classic propeller safe enough for a helicopter with a take-off weight of over 3.5 tons. The new machine made its first flight in 1999 and at the end of the same year received the designation EC145 (but the designation VK 117 S-2 is often used). The equipment and technical characteristics of the helicopter make it possible to use it in forestry – to extinguish forest fires. This helicopter is capable of delivering up to 9 paratroopers-firefighters and 300 kg of cargo and fire extinguishing equipment to the fire site, as well as up to a ton of water on an external suspension. 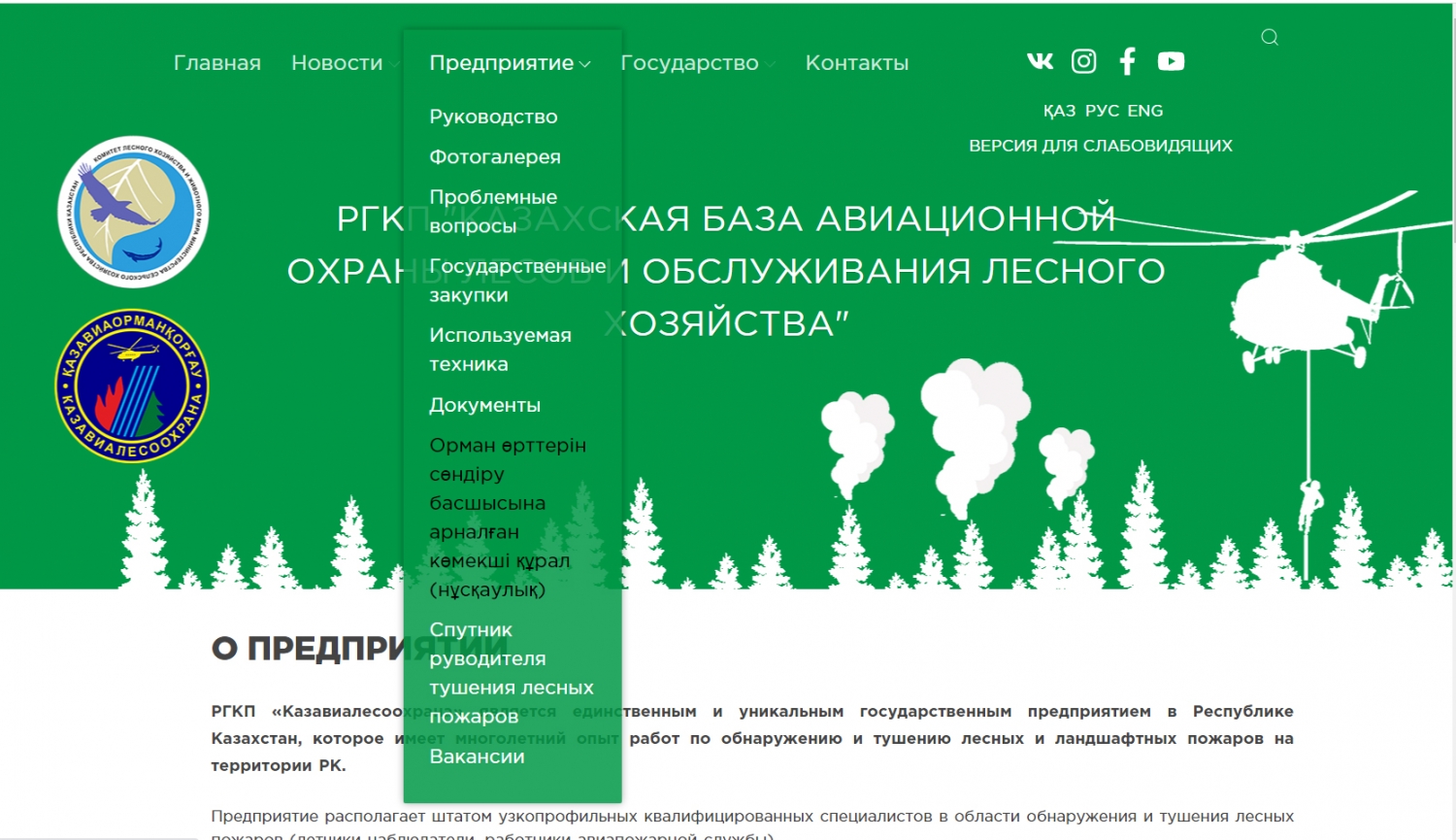 Dear site users! We are pleased to inform you that we have a page with training material for forest fire extinguishing managers in the state language. The transition to this material can be carried out using the link https://aviales.kz/education/sputnik.html or by clicking on the link in the menu.

APRIL 3, 2022 SPECIALISTS OF THE ALMATY AVIATION DEPARTMENT MADE A FIRE REVIEW
On April 3, 2022, specialists of the Almaty aviation department, while carrying out forest aviation work, reconnoitered the state of the fire that occurred in
EXTINGUISHING FOREST FIRES (MANUAL FOR FOREST FIREFIGHTERS)
https://disk.yandex.kz/i/119tZo0y-ina0w
PREPARATORY ACTIVITIES OF THE BAYANAUL AVIATION DEPARTMENT BEFORE THE START OF THE 2022 FIRE SEASON
In preparation for the 2022 fire season, the personnel of the airborne fire service undergo theoretical training in special disciplines at the Bayanaul
DURING THE FIRE SEASON OF 2022, A PARTENAVIA P.68 AIRCRAFT IS INVOLVED IN THE ALMATY AVIATION DEPARTMENT TO PERFORM FOREST AND AVIATION WORK
﻿
Official website of the KAZAVIALESOOHRANA © 2011-2022
All rights reserved. Reprinting and use of the site materials is allowed only with the consent of the site administration
259 Kerey-Zhanibek khandar str., Almaty,
Tel.: +7 (727) 271-81-45
Е-mail: airbar@list.ru
Up